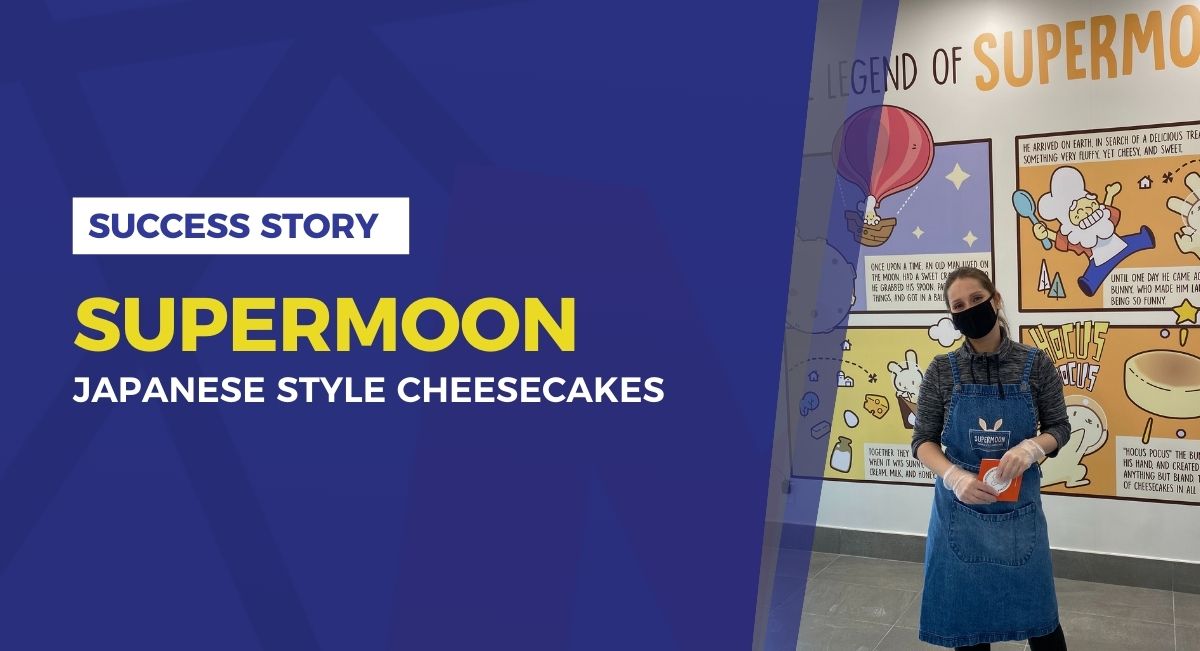 You know it is a trend when people line up for the privilege of spending their money. After waiting up to two hours to reach the counter, people were limited to purchasing just one item. That item was a Japanese-style cheesecake. The food trend, along with its unmistakable baking aroma, still inspires consumers to line up in cities from Canada to Malaysia.

Mona Absi joined the line in the Union Station concourse one evening in 2016.

Later, Mona and her husband Sami Kustantini shared the cheesecake in their Streetsville home and Mona was inspired to say, “I can do this!”  It was the very beginning of Mississauga’s own Supermoon Japanese Style Cheesecakes shops.

“Mona is a natural baker,” her husband remembered in a recent telephone interview. “Initially, she did it just for for fun, but she was determined to figure it out. She’s a good chemist and knew if she kept experimenting, then the trial and error would get her there. When she was on maternity leave with our second child, things got more serious as she was testing the concept at home almost daily. It wasn’t easy. Her first several attempts were failures.”

Eventually, Mona got the recipe right and could replicate her results with consistently delicious results.

“One day, Mona was talking to her father on the phone about her recipe. He happened to be in Malaysia on business and had seen the line-up for cheesecake in a shopping mall there,” Sami remembered. “He said, ‘if you want this, I will back you’ and, to make a long story short, she never went back to her job after her maternity leave ended.”

The story, though, is not as simple as following a global trend. Kustantini is an established food marketer and former burger chain franchisee. The married couple became business partners, decided on the name Supermoon together and worked at developing the business model in 2017.  After looking for several months, they found their first location on Queen Street South just 2 minutes from their house.

The couple just recently opened their second location in the South Common Centre at Burnhamthorpe and Erin Mills parkway. Almost as soon as they opened, Mississauga was hit with its second wave of restrictions due to the COVID-19 pandemic.

“It has been challenging, but fortunately not completely devastating,” Sami said. “In spite of the lock down, we are very lucky even with no grand opening. We’re in the absolute center of the mall, half-way between Walmart and No Frills and we’re working, even though half the mall is closed, because most of our business is organic customers. People see the shop and want to check out where the great smell is coming from.”

Mona and Sami made the decision not to temporarily shut down Supermoon when the pandemic first hit in March. Recently, the Digital Main Street team working with the Mississauga Business Enterprise Centre approached the business. Through the Digital Main Street Program, Supermoon was eligible for a $2500 digital transformation grant to seek assistance with enhancing their online presence.

“We were serving walk-ins and making deliveries through online services that take a big commission, but we wanted to add a digital business for ourselves with online orders. When Digital Main Street came calling, we were able to transition our website to an e-commerce site to deal with current reality,” Sami said.

Government-supported programs, like Digital Main Street, are one part of keeping small businesses like Supermoon thriving in Mississauga, but there are other encouraging elements too.

“We’re grateful not only for the support the community showed us during the pandemic.” Sami and Mona said in an email statement, “but also for the devotion of our phenomenal team, who stood by us when things got tough.”

Digital Main Street is a program that helps main street businesses achieve digital transformation. This program is built around an online learning platform, structured training programs, and our Digital Service Squad, a team of street-level members who help main street businesses grow and manage their operations through technology.

The Mississauga Business Enterprise Centre (MBEC) is a business unit of the City of Mississauga’s Economic Development Office. MBEC is your central source for business information, resources and guidance. For information and guidance, our team is currently available to serve you remotely. Please contact us by phone or email.

A New Lease on Business: Legal Expertise for Small Businesses